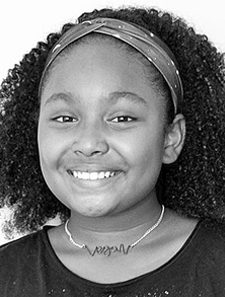 Bio: Genesis Butler went vegan at six years old after learning her meals were a product of animal exploitation. She founded her nonprofit organization, Genesis for Animals, which raises funds for sanctuaries around the world. Genesis has won several awards including the 2018 Lisa Shapiro Youth Animal Activist of the Year. She became the youngest TEDx speaker for her speech “A 10-Year-Old’s Vision for Healing the Planet.” She’s also been featured in several documentaries including The Invisible Vegan, Vegan: Everyday Stories, and Corky, and in Cesar Chavez Respect for All where she learns about the activism of her great uncle, Cesar Chavez.

Sample Talks: Compassion Begins on Our Plates; Living a Compassionate Lifestyle at Any Age; You are Never Too Young or Too Old to Be an Animal Rights Activist; Healing the Planet One Meal at a Time.