UPDATE: The American Vegan Center opened its doors to the public on September 9th, 2021, sharing vegan food info, books, history, vegan merchandise and much more. Read our official announcement. We continue to offer Veg History walking tours of Old City. Sign Up Here for a tour!

Imagine touring a historic city and finding a vegan visitors’ center where you are welcomed and can relax. The city where the United States vegetarian movement was launched in 1817, and where the modern vegan movement began in 1957, today is home to a vibrant vegan food scene, from nationally-acclaimed fine dining to amazing vegan burgers and donuts. Philadelphia Pennsylvania has a rich and curious plant-based past and is today is known for great events, friendly people, and a diverse vegan community. 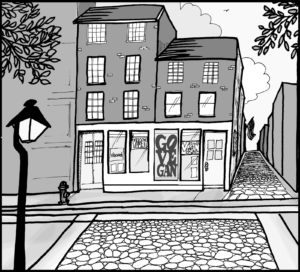 Located on a charming corner of Old City, the American Vegan Center will initially act as an information center pointing the way to vegan food options in the historic district and at key tourist spots. The front room, or Welcome Room, is a small shop with books, T-shirts, and Philly-specific vegan souvenirs. As live indoor events become safely feasible, the Center will open its event room to host presentations by chefs, doctors, scholars, authors, and others.

This summer, walking tours launched showcasing Philly’s rich vegetarian and vegan heritage. These will be a mainstay of the Center’s offerings. (Click to see the current schedule of upcoming veg history tours.)

The announcement of the Center has drawn attention from many quarters. Here are some of the articles that paint a picture of the Center and its goals from differing perspectives:

Anna Starostinetskaya, VegNews:
The US is getting a national vegan welcome center

To make the AVC a reality, we are soliciting involvement wherein individuals, businesses, and foundations pledge annual donations of $100 to $50,000. Our target is $200,000 for the first year, of which already pledged is $100,000.

Please send checks to: AVS, PO Box 369, Malaga NJ 08328. Phone AVS at 856-694-2887 for more information. PayPal buttons are very useful for smaller donations and monthly pledges, but they do take out a fee. Budget is available upon request.

We want to make this center the premier visitor’s center in Philadelphia but to do so, we need the center to be staffed full-time! If you are interested in creating an endowed staff position for the AVC, please reach out to Development Manager Gabby Mora at [email protected]

Choose your amount and whether to donate once, monthly, or annually!