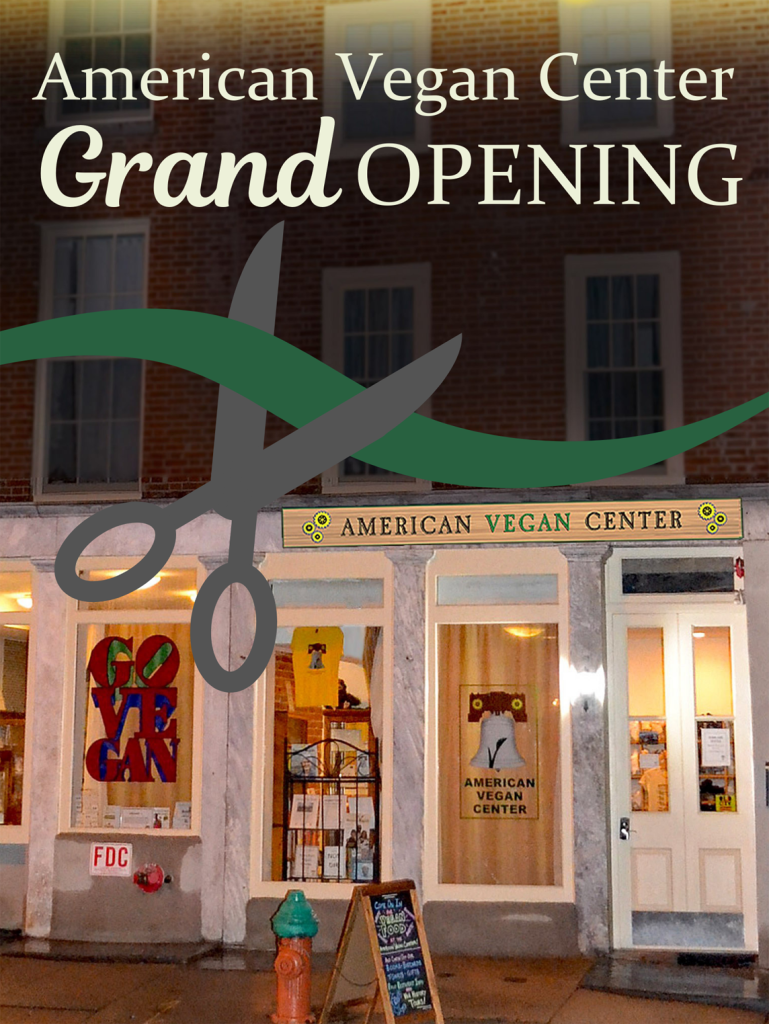 Join us Friday, August 5th and all weekend long as we celebrate the Grand Opening of the American Vegan Center (AVC)–Philadelphia’s vegan tourist attraction!

AVC has been operating at 17 N. 2nd Street since the latter part of 2021, introducing people to the fascinating vegan and vegetarian history of Philadelphia with walking tours. The Center features books, snacks, postcards, T-shirts and other merchandise, restaurant info, food samples, and much more! Events began in June 2022.

Learn about the Center’s opening and the growth of the vegan lifestyle into the mainstream. American Vegan Society President Freya Dinshah, who published the first vegan cookbook in the U.S. back in 1965, will give remarks on how far the movement has come. AVS officers and trustees will also present, including Barata El, who will recite his poem “A Cow at the Window.”

Be there for the festivities, special announcements, and the introduction of new merchandise. Door prizes and giveaways will abound as we officially open the AVC.

Anyone who comes to the AVC on Friday who can’t get in due to a sold-out-capacity crowd will get a free postcard they can bring back during the weekend for a custom veg-history cartoon, a timeless souvenir of this vegan milestone.

As part of the grand-opening celebration, the AVC is offering its popular veg history walking tour for free ($23 value). Attendees will learn the amazing history of the U.S. vegetarian movement that started just a half-block away from the Center; the U.S. vegan movement was also started in Philadelphia–by American Vegan Society’s founder Jay Dinshah. Due to the Friday afternoon tour “selling out,” we have added two additional free tours Saturday and Sunday. The tours will run from 4:00 p.m. to 5:16 p.m. Sign up for Saturday 4 pmTour | Sign up for Sunday 4 pmTour

The grand-opening fun continues through the weekend with discounts, door prizes, and more. This “Sat/Sun” ticket will connect you with fun and festive deals: Your name will be at the door to receive 25% off any AVC-logo clothing/merchandise, and 25% off any one item from our freezer.

However you participate, be sure to follow us on social media and come to future events!

NOTE: Masks will be required for this indoor event. Thank you.